This page provides summary information on the following subjects:


Meta-information   (to top of page)


General focus of the model   (to top of page)

SWAP (Soil-Water-Atmosphere-Plant) simulates transport of water, solutes and heat in the vadose zone in interaction with vegetation development. SWAP has been employed to explore alternative flow and transport concepts, to analyze laboratory and field experiments, and to evaluate management options with respect to field scale water and solute movement. In the horizontal direction, SWAPï¿½s main focus is the field scale. Published, typical examples are given by Van Dam et al. (2008) and Kroes et al. (2017) for:

SWAP also serves to generate soil water fluxes for pesticide and nutrient models. The model can be used to explore new flow and transport concepts for agro- and ecohydrology and on the analysis of laboratory and field experiments.

General context of use   (to top of page)

The SWAP model has a wide range of users:

History of the model   (to top of page)

Systems, sub-systems, mechanisms considered in the conception of the model   (to top of page)

SWAP is a computer model that simulates transport of water, solutes and heat in variably saturated top soils. The program is designed for integrated modeling of the Soil-Atmosphere-Plant System. Transport processes at field scale level and during entire growing seasons are considered. System boundaries at the top are defined by the soil surface with or without a crop and the atmospheric conditions. The lateral boundary simulates the interaction with surface water systems. The bottom boundary is located in the unsaturated zone or in the upper part of the groundwater and describes the interaction with regional groundwater.

Architecture and modules of the model   (to top of page)

SWAP consists of clearly defined modules for soil water flow, soil heat flow, solute transport, crop growth, macropore flow and interaction with groundwater and surface water systems. An extensive description of SWAP4 is given by Kroes et al. (2017). The figure below provides the sequential flow chart along all components during a simulation. 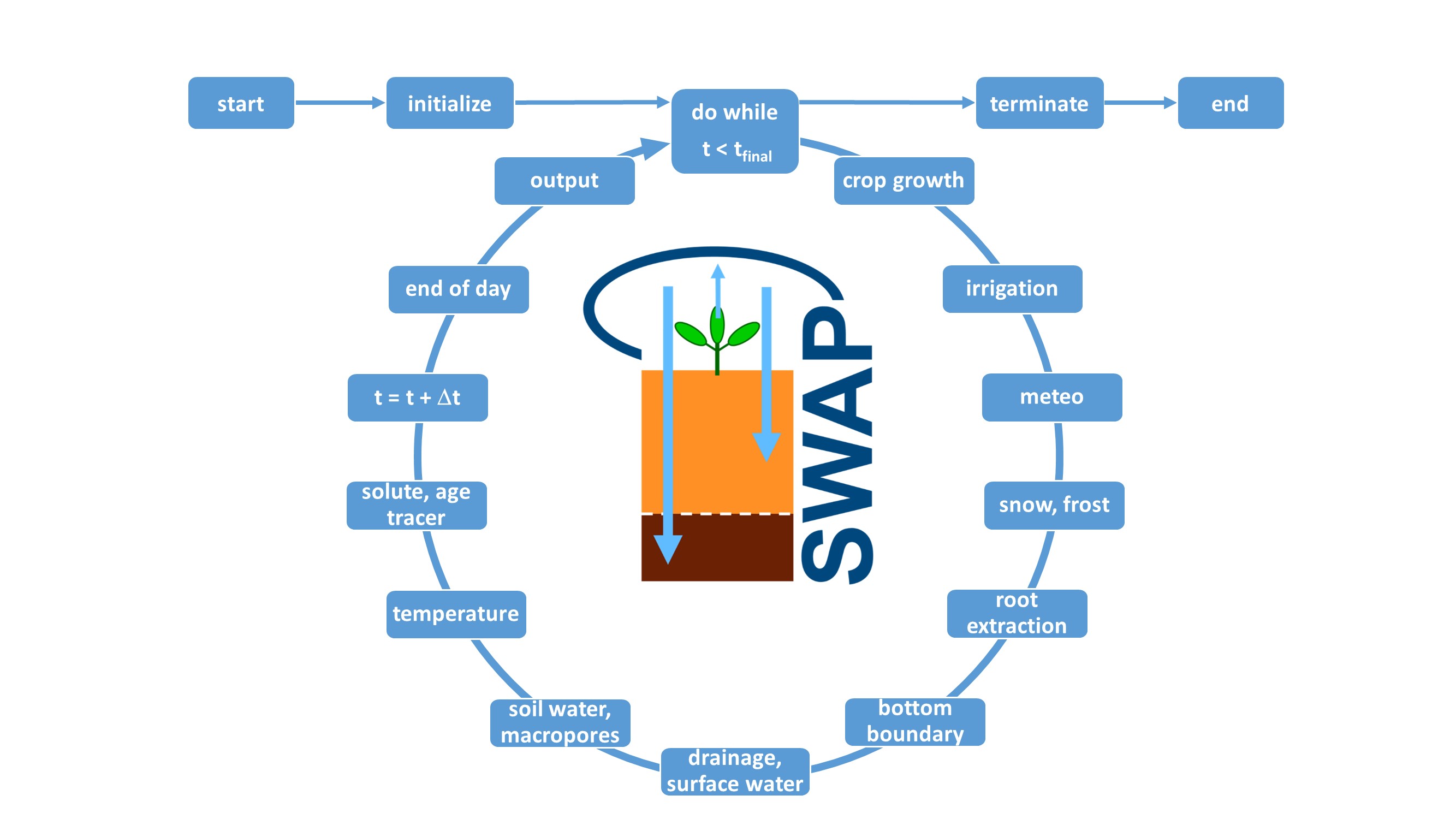 All policy measures taken are related to water management issues. Examples are:

Building the model   (to top of page)

The model input parameters for soil hydrology and crop growth are described by Kroes et al. (2017).

The model input parameters for soil-N, Soil-C and crop-N are described by Groenendijk et al. (2016).

The model is distributed with a basic data set. As SWAP is a field scale model, most of the input parameters are clearly defined and can be measured separately. Input parameters may also be determined by inverse modeling. Documented experience is available on automated calibration using the PEST/SWAP combination, validation procedures and validation examples (Van Dam et al, 2008).

The model output parameters are described by Kroes et al. (2017).

Strengths and limitations of the model   (to top of page)

Water flow and solute transport in top soils are important elements in many environmental studies. The agro- and ecohydrological model SWAP (Soil-Water-Plant-Atmosphere) has been developed and is strong in simulation of simultaneously water flow, solute transport, heat flow, macropore flow and crop growth at field scale level.

For detailed pesticide and nutrient flow combination other transport models such as PEARL and ANIMO are recommended.

Application at a regional scale within a GIS-environment requires additional features that are not standard distributed with the model.

SWAP adheres to the open source philosophy. This allows other research teams to integrate the model into all kinds of Decision Support Systems. This has been done at various occasions (e.g. the PEARL team, https://www.pesticidemodels.eu/pearl/home/ )

Recent versions of the model are distributed without a Graphical User Interface.

Downloads on internet   (to top of page)

During the period 2004-2020 the model has been downloaded from more than 150 countries. The figure below shows the spatial distribution of unique SWAP downloads worldwide. 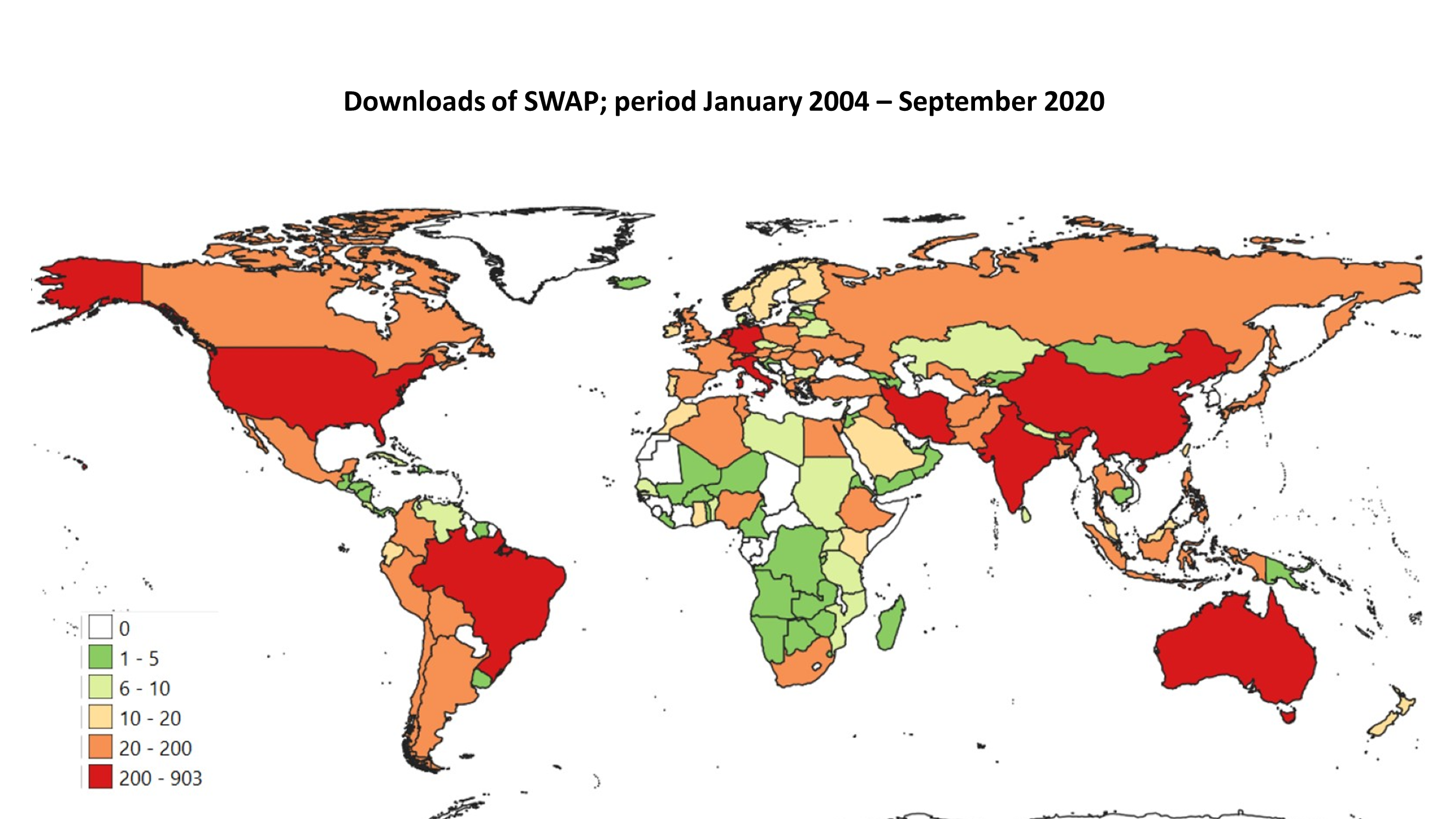